The summer of infusions continues with a trip to exotic locales…….in our martini glasses at least.  Searching through my pantry the other day resulted in the discovery of not one, but three, containers of saffron.  My first question was how on earth did I end up with three containers of saffron?  My second question- what to do with all that golden glory.   As someone who has no interest in either cooking or eating paella, I was stumped.   A lovely risotto will take care of some of it, but I had somehow acquired the motherload and hated the thought of it going to waste.   So how does Shaker One dispose of most things in her kitchen?

Why, they become martinis!  I did a bit of googling and came up with a long list of martinis using saffron infused vodka and gin.  Wow, I had no idea it even existed!  I infused some vodka and brought it down to test drive with Shaker Two.

The saffron vodka has a gorgeous almost glowing color and the smell is really unusual.  A few shakes later and into the glass it goes……..

Well, Shaker Two doesn’t hate saffron vodka as much as she does Campari, but it is close!  This was aggressively unpleasant.  Scary even.  No olives.

Undaunted, we plowed ahead with The Saffron Ginger Martini 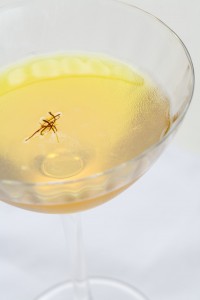 Um, better but still not really something we would choose to drink.  Being generous- 2 1/2 olives.

Shaker One has not given up on saffron martinis……..I shall need to search out some better recipes and get back to you.  Now where is that rissotto recipe?