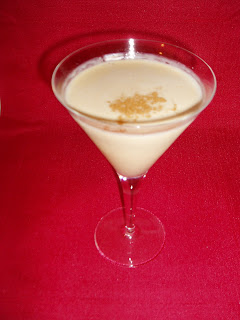 Shaker 1 here- I just so happened to have a little bit of the Chai tea infused vodka left over from Zombie Night. We were so close to creating a terrific teani, so I wanted to see if we could bring it up an olive or so.

Toss a cinnamon stick or two into about 1/2 cup heavy cream. Simmer for a few minutes to infuse the cream. Chill and whip. Shake up ice, 2-3 large dollops of the infused whipped cream, about an ounce of simple syrup and 3 ozs of chai infused vodka (you can also sweeten the cream instead of adding simple syrup). Strain and pour into martini glass. Garnish with ground cinnamon if desired.

(I like to call this the “instant” method)
In a shaker, add ice, 3 ozs. chai infused vodka and an ounce and a half of Coffeemate Cinnamon Vanilla cream non dairy creamer. Shake, strain, pour, enjoy.

I’ve got to say, as weird as it sounds the Coffeemate method was really fantastic! Tasty and creamy with a subtle cinnamon hint that was not at all overpowering. I like the body that the whipped heavy cream gives the teani, but if you’re in a hurry for some Chai Teani goodness or just feel plain lazy-Method 2 is your friend.