Remember college drinking? The cheapest swill was still a thrill. You hadn’t yet discovered that booze doesn’t have to taste like turpentine. The successful use of a fake ID covered many a taste sin. Now those days are in the distant past and I expect more from my cocktails. But when I venture back to a college bar type place, I set the bar a bit lower. Yesterday I think I tripped over it.

When I’m at a place like this, I keep it simple. Nothing more taxing than a booze and one mixer. How can you go wrong with a vodka cranberry? When the first sip ends in a cough, you know you’ve got problems. I assumed I’d mistakenly ordered well vodka and resolved to correct my error on the second round. So I very politely ask the “bartender” if they had any other brands of vodka. She archly informed me that their vodka of choice~Cruzan~ was excellent and of very high quality (Note: a cursory google search turned up Cruzan rum, but no vodka. When you’re not even googleable that’s not a good sign in a booze-perhaps I got the name wrong?). I nicely said that it wasn’t the best vodka I’ve tasted and was met with the following response:

“It’s much better than Gray Goose and equal to Absolut”
Martinis on the house for anyone who can make sense of that logic. Honey, you just either gave Absolut quite the promotion or insulted Gray Goose (both acceptable brands in my book).
I resisted telling her that I’ve taken off my nailpolish with stuff that tastes smoother than her beloved “Cruzan” and told her I’d just have a screwdriver.

This is what I got: 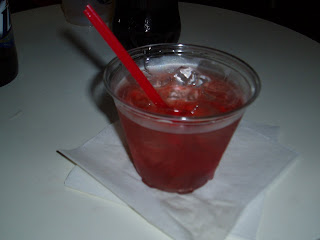 Next time I’ll have a beer.